A Virginia couple, Leo Fisher and his wife Susan Duncan, both 61 years old, lived a good life in their upscale community in McLean, Virginia. Susan Duncan had recently retired from a career in government, and Leo Fisher was a respected attorney and partner at his law firm, Bean Kinney and Korman PC. However, their happy life was shattered on a November evening when an intruder broke into their home, attacked and tortured them, and then left them for dead. 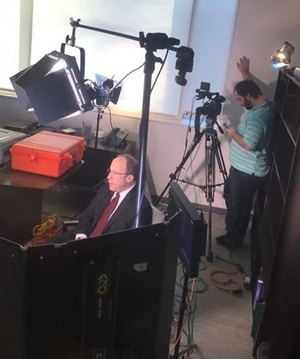 Fortunately, the couple survived their brutal attack, and Leo Fisher recognized his attacker. He had to spell out the name of the intruder when the police arrived at the scene because of his slit throat. Leo identified the attacker as Andrew Schmuhl.

The police were able to locate Andrew Schmuhl’s vehicle soon after, and a high-speed chase ensued before the driver of the vehicle pulled over. The police discovered that Andrew Schmuhl’s wife, Alisha Schmuhl, was driving the car, and Mr. Schmuhl was a passenger. However, he was only wearing a bloodied adult diaper and appeared disoriented.

When searching the couple’s vehicle, the police found a wealth of evidence, including Andrew Schmuhl’s bloody clothes, the gun and knife used in the attack, handcuffs, and a hit list with other people’s names on it. As the police investigated further, the crime became even more bizarre. Both Alisha and Andrew Schmuhl were attorneys, although Andrew was no longer working due to a back injury that required him to take many powerful pain medications. Even more shocking, Alisha Schmuhl was an attorney at the same firm as Leo Fisher, and he had been one of her supporters.

However, the police believe the motive for this attack began when Alisha and Andrew Schmuhl had used Leo’s name fraudulently on a loan application where they also listed Andrew as working for Leo’s firm. When Leo Fisher discovered this and confronted Alisha, he warned her that this could be considered fraud. He suspended her the next day and then had a meeting with Andrew Schmuhl where Andrew became very confrontational. Soon after, Leo Fisher fired Alisha. Just 11 days after her termination, Alisha and Andrew Schmuhl carried out their horrific attack on Leo and Susan.

Alisha and Andrew Schmuhl were charged with seven felonies: abduction, aggravated malicious wounding, burglary, and a number of weapons charges. It was 18 months before their separate trials were scheduled. Leo’s trial was first. He claimed that he did not know what he was doing due to the heavy medications he was taking and blamed his wife, Alisha, for making him attack Leo and Susan without his knowledge. However, the jury found him guilty on all counts, and he was sentenced to two consecutive life sentences plus an additional 98 years in prison. Alisha Schmuhl entered into a plea agreement before her scheduled trial and was sentenced to 45 years in prison.

Peter Greenspun was interviewed as part of the Crime Watch Daily episode about this heinous crime and provided insightful commentary into the crime and why Andrew Schmuhl’s defense did not work. He noted that although Andrew’s bizarre behavior of just wearing diapers suggested something was mentally wrong with him, the involuntary intoxication defense raised by his attorneys did not work. Mr. Greenspun concluded that the interrogation of Leo Fisher, the vicious attack, and the thwarting of the couple’s escape appeared to be with thought and planning and was inconsistent with Mr. Schmuhl’s defense of intoxication.

Are you facing criminal charges? You need an experienced criminal defense attorney like Peter Greenspun to investigate your crime, build your defense, and help you to get the charges dismissed or reduced with the least possible outcome. To schedule a free consultation with our criminal defense team, start an online chat or call our office today.