What is Considered Trespassing in Virginia?

In Virginia, trespass can be found under Virginia Code § 18.2-119.   The code states the following:

If any person without authority of law goes upon or remains upon the lands, buildings or premises of another, or any portion or area thereof, after having been forbidden to do so, either orally or in writing, by the owner, lessee, custodian, or the agent of any such person, or other person lawfully in charge thereof, or after having been forbidden to do so by a sign or signs posted by or at the direction of such persons or the agent of any such person or by the holder of any easement or other right-of-way authorized by the instrument creating such interest to post such signs on such lands, structures, premises or portion or area thereof at a place or places where it or they may be reasonably seen, or if any person, whether he is the owner, tenant or otherwise entitled to the use of such land, building or premises, goes upon, or remains upon such land, building or premises after having been prohibited from doing so by a court of competent jurisdiction by an order issued pursuant to §§ 16.1-253, 16.1-253.1, 16.1-253.4, 16.1-278.2 through 16.1-278.6, 16.1-278.8, 16.1-278.14, 16.1-278.15, 16.1-279.1, 19.2-152.8, 19.2-152.9 or § 19.2-152.10 or an ex parte order issued pursuant to § 20-103, and after having been served with such order, he shall be guilty of a Class 1 misdemeanor. 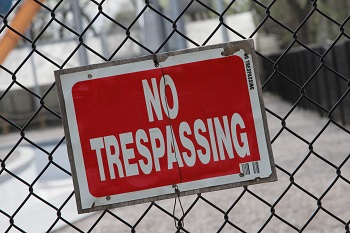 Trespassing in Virginia means entering someone else’s property without permission, or remaining on property after being told to leave.  Being told to leave can occur through a variety of communications, including personal invitations, oral notice, or public signs. The Commonwealth has to prove that the person alleged to be trespassing was given notice not to be on the property in order to obtain a conviction under this code section.

What are the Penalties for Trespassing in Violation of Virginia Code § 18.2-119?

Trespassing under Virginia Code § 18.2-119 is a class 1 misdemeanor.  This means it is punishable with up to 12 months in jail and a fine of up to $2500.  There are a variety of trespass laws that are similar to Virginia Code § 18.2-119, but will depend on the location of the alleged trespass.  For example, there are laws specific to trespassing around churches, schools or while hunting.  Each law has its own specifications and elements that the Commonwealth must prove before securing a conviction.

If you have been charged with trespassing, call the Fairfax trespassing lawyers at Greenspun Shapiro PC.

by Anastasia T. Kranias
Connect with me
Criminal Defense Attorney