Is it against the law to brandish a gun in Virginia?

The gun you hold doesn’t have to work for you to be convicted of a crime in Virginia. Virginia Code §18.2-282 makes it a crime to “to point, hold or brandish any firearm or any air or gas-operated weapon or any object similar in appearance, whether capable of being fired or not, in such manner as to reasonably induce fear in the mind of another.”

Criminal Charges for Brandishing a Firearm in Virginia 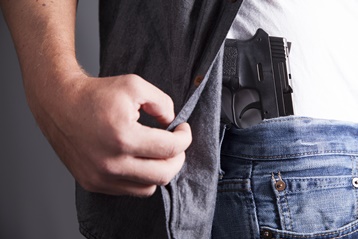 and a criminal record.

However, brandishing a firearm can be a Class 6 felony if the incident occurs on or near school grounds. Specifically, you may be charged with a Class 6 felony if the alleged crime occurred on the property of a public, private, or religious elementary, middle, or high school or on public property within 1,000 feet of school property. The sentence for a Class 6 felony includes one to five years in prison, a fine of up to $2,500, and a criminal record.

You are not guilty of brandishing a firearm just because the Commonwealth of Virginia charges you with a crime. You may have one or more possible defenses, including:

An experienced Virginia criminal defense attorney will review every aspect of your case and raise all possible defenses.

Talk to a Criminal Defense Lawyer Before it’s Too Late

Don’t take any unnecessary chances with your legal defense. Instead, contact our experienced Fairfax violent crimes attorneys for an initial case evaluation and consultation today.