Double Jeopardy: How Does it Protect You When You Have Been Charged With Committing a Crime? 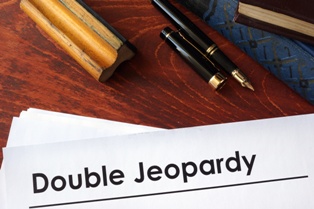 The United States Constitution provides an umbrella of protections that people may not understand the importance of until they are in need of them. Some constitutional rights are there to protect you when facing criminal charges. For example, you have the right not to incriminate yourself and to have an attorney present when the police are interrogating you. In addition, you are protected from being personally searched or seized or having your property searched or seized in a variety of situations. Another important constitutional right that exists is the protection against being convicted of the same crime twice by the same governmental entity. This right is often referred to as the protection against double jeopardy. An experienced criminal defense attorney can help ensure that the police and prosecutor are not violating this important consitutional right.

What Are Your Double Jeopardy Rights?

The Fifth Amendment to the Constitution provides in part that “nor shall any person be subject for the same offense to be twice put in jeopardy of life and limb.” This is referred to as the double jeopardy clause, and it protects an individual from being charged with, tried for, or convicted of the same crime twice. Under double jeopardy, a person cannot:

While it sounds relatively straightforward, this prohibition is more complex than it may seem. Here are some important guidelines as to whether the double jeopardy protections apply:

Let Us Help You Enforce Your Important Constitutional Rights

If you are facing criminal charges, you need the help of an experienced criminal defense attorney to enforce your double jeopardy and other important constitutional rights. Even if you are guilty of the offense that you are being charged with committing, violations of your constitutional rights and other defenses can lead to the dismissal of the charges. Our experienced criminal legal team is here to aggressively build a strong defense to the charges you face. Call our office today to schedule your free consultation to learn more.