What the Right Against Self-Incrimination Means 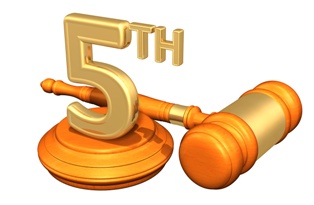 Most people have heard the phrase “he’s taking the Fifth” in news stories, TV dramas, and movies. This phrase refers to an important privilege against self-incrimination guaranteed by the Fifth Amendment to the United States Constitution. Whether you are a witness or a defendant in a criminal proceeding, you need to understand this important constitutional right. If you are at all worried about your right to assert it, you need to consult with an experienced criminal defense attorney who can help you make the best decision on how to proceed.

What Is the Fifth Amendment?

The Fifth Amendment is part of the Bill of Rights and provides a number of important rights. Some of these protections include the following prohibitions:

When Can You Invoke Your Right Against Self-Incrimination?

The right against self-incrimination can be asserted in a number of courts and legal proceedings. Witnesses and defendants may be able to plead the Fifth in these situations:

In order to invoke this right, certain conditions must be met. These requirements include:

What Happens If a Defendant Pleads the Fifth in a Criminal or Civil Case?

In some cases, a defendant may also be sued in a civil lawsuit by the victims of his alleged crime, such as in a civil lawsuit following a car accident. A defendant can invoke his right against self-incrimination in the civil case as well as the criminal proceeding. However, in the civil case, the jury may be allowed to make certain inferences from the refusal to testify, and the defendant may be barred from presenting certain evidence.

The Right of Witnesses to Refuse to Testify

The right of a witness to refuse to testify is different than that of a defendant. In both civil and criminal cases, witnesses who have been subpoenaed cannot refuse to take the witness stand. They must be sworn in and then are allowed to selectively refuse to answer questions that may incriminate them without waiving their right against self-incrimination. If the Fifth Amendment privilege is asserted, the trial judge must determine whether the privilege applies or whether the witness may be compelled to answer specific questions.

Do you have questions about your right to invoke your right against self-incrimination? Are you facing criminal charges? Our experienced criminal defense attorneys are here to help. Call our office today to schedule your free, no-obligation consultation.