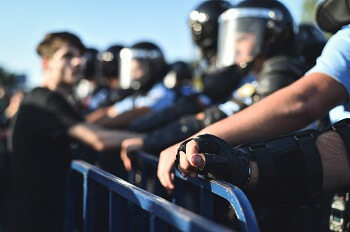 Assault and battery is a serious offense in Virginia that can cause long-term consequences in a person’s life. If a person is charged with assaulting a police officer, the charges can be even more serious. Due to all the news about police assaults, shootings, and killings of officers, the police are becoming increasingly intolerant of any actions that may be interpreted as physical resistance or assault. If you have been charged with an assault on a police officer or a similar offense, you need the assistance of an experienced violent crimes attorney to reduce the harsh sentence that you may face.

Assault and battery is generally a misdemeanor offense in Virginia. A person can commit battery through any offensive or harmful conduct, which can be as minor as throwing a snowball or small object at someone, if the person makes some contact with the victim and intended harm to the victim. An assault is an intentional act that makes a person think that he will be offensively touched or intentionally harmed.

Under Virginia Code § 18.2-57, it is a Class 6 felony to commit an assault and battery on a law enforcement officer. Since a battery is any unwanted touching, these charges can be raised for any minor action of a suspect. This law applies to police officers and many other government officials, including:

If you are convicted of this offense, you face a mandatory minimum prison sentence of six months in jail that can be increased to one to five years in prison. You may also be fined a maximum of $2,500.

Obstruction of justice is generally a Class 1 misdemeanor with a possible sentence of up to 12 months in jail and a fine of up to $2,500. However, a person can be charged with a Class 5 felony if he knowingly attempts to intimidate or impede a police officer and does so in a court in relation to a drug offense or felony.

Resisting arrest is similar to obstructing justice but is a different offense in Virginia. Both involve intentionally impeding a police officer from performing his duties. Unlike resisting arrest, you may be charged with obstruction of justice in situations other than an arrest.

Under Virginia Code § 18.2-479.1, you may be arrested for resisting arrest for intentionally preventing or attempting to prevent a law enforcement officer from arresting you, with or without a warrant. This is defined as fleeing under one of these circumstances:

Resisting arrest is a Class 1 misdemeanor with similar penalties to obstruction of justice.

Are you being charged with one of these offenses? You need the assistance of an experienced criminal defense attorney to raise all your possible defenses. Fighting back may result in the charges against you being dismissed or reduced to a lesser offense with a less severe sentence.

At Greenspun Shapiro PC, our experienced criminal defense attorneys have years of experience aggressively fighting to obtain the best possible outcome for our clients facing criminal charges. To learn how we can help you, call our Fairfax office to schedule your free, no-obligation consultation.