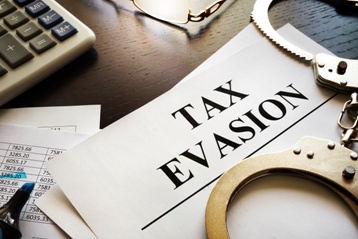 It is not a crime to make a mistake on your tax return. However, it is a crime to intentionally or willfully avoid paying the taxes that you owe to the government.

If you knowingly avoid paying taxes or deliberately pay less than you owe, the government may charge you with tax evasion. Before you can be found guilty of a crime or sentenced for a tax evasion conviction, the government must prove that you violated the law.

The Crime of Tax Evasion

The specific elements of the crime that the government must prove to get a tax evasion conviction are the same for evasion of assessment and evasion of payment crimes. Prosecutors must prove that you:

Some examples of tax evasion include:

If you are found guilty of tax evasion in Virginia, then the Commonwealth may sentence you to:

Generally, the potential penalties for federal tax evasion include up to five years in prison, a fine of up to $250,000, and payment of all overdue taxes. Specific types of tax evasion may lead to specific sentences, however. This includes:

What to Do If You’re Charged with Tax Evasion

Tax evasion crimes are often complicated. A conviction could lead to financial hardship, time in prison, and a permanent criminal record. Don’t let a mistake ruin your life. Instead, work with an experienced Fairfax criminal defense lawyer to untangle all of the financial aspects of your tax case and apply all possible legal defenses. Call our criminal defense attorneys or contact us through this website today to learn more about your potential defense and to protect your future.