Is it Against the Law to Carry a Concealed Weapon in Virginia? 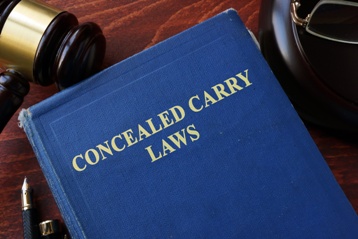 Generally, it is against the law to carry a weapon that is hidden from common observation in Virginia.

Of course, few gun laws are that simple.

If you or a loved one are charged with carrying a concealed weapon in violation of Virginia Code §182.-308, then we encourage you to learn more about the weapons included in this law, exceptions to this law, potential penalties for violating this law, and how an experienced Virginia criminal defense lawyer can help you.

What Is a Weapon?

Additionally, any weapon that is similar to those described above is considered a weapon for purposes of Virginia’s concealed weapon law.

Legal Consequences for Carrying a Concealed Weapon in Virginia

The potential penalties for violating Virginia’s concealed weapon law become more significant with each conviction under this law or a substantially similar county, city, or town ordinance. Specifically:

These sentences apply unless an exception to Virginia’s concealed weapon law is relevant to your case.

Additionally, it is legal for the following people to carry concealed weapons in limited circumstances:

Finally, even if you don’t fall into any of these categories, you may raise an affirmative defense if you are accused of carrying a concealed handgun, and you have a valid concealed handgun permit.

Talk to a Criminal Defense Lawyer Before It’s Too Late

You have a lot at stake if you’ve been arrested for carrying a concealed weapon in Virginia. A mistake in your defense could mean that you serve a jail sentence, pay a fine, and have a criminal record. Please make sure that your rights are protected. Call our experienced Northern Virginia criminal defense lawyers today to learn more.