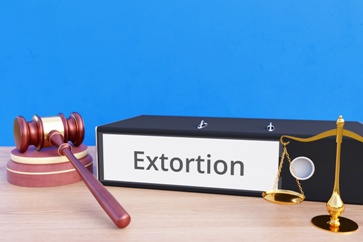 Extortion is a Class 5 felony in Virginia. If you’ve been charged with extortion, you need to understand the case against you, the possible penalties you face, and your potential defenses. However, you don’t have to figure all of this out on your own. Our experienced Fairfax criminal defense lawyers may help you every step of the way.

Each state has its own extortion law. In Virginia, the extortion law is found in Virginia Code §18.2-59. According to the law, there are four ways for someone to commit extortion. Extortion occurs when a person forces or extorts money, property, or another pecuniary benefit from a person by doing one or more of the following:

In the movies and in real life, extortion often involves money. However, extortion doesn’t always involve money. It may also involve real estate, personal property of value (such as art or jewelry), evidence of a debt, or anything else of financial value to the person allegedly making the threat or otherwise extorting another individual.

Extortion is a Class 5 felony in Virginia. Accordingly, a person convicted of extortion faces:

Additionally, a felony conviction could impact:

In some cases, a felony sentence could also impact an immigrant’s right to remain in the United States, security clearance, and other rights.

You won’t necessarily be convicted of extortion just because the Commonwealth of Virginia charges you with extortion. However, you will need to defend yourself to avoid jail time, fines, and the other consequences of a felony conviction.

The possible defenses in an extortion case depend on the unique circumstances that led to the extortion charge. These defenses may include, but may not be limited to:

An experienced criminal defense lawyer will thoroughly investigate the facts that led to the charge and the elements of the charge to identify all possible defenses in your case.

What to Do If You’re Charged With Extortion in Virginia

An extortion conviction can change your life. It’s understandable that you want to take action right away to protect yourself. However, we encourage you not to speak to investigators, police officers, or prosecutors about the charges against you or to post anything on social media. The government may use anything you say against you and it’s easy to say something that can be misunderstood and harmful to your defense.

Instead, we invite you to contact an experienced criminal defense lawyer. Whether you have been formally charged or you anticipate that charges may be coming, our Fairfax criminal defense attorneys are here to help you. We will investigate all aspects of the case against you and advise you of all of your legal options so that you can make informed decisions about what to do next.

You can call us at any time or complete our contact form to have a member of our team reach out to you. Together, we can make sure that you are treated fairly.