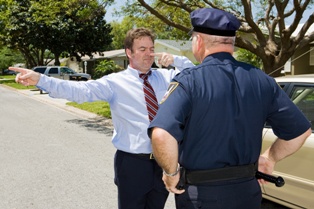 If the police pull you over and suspect that you are driving while intoxicated, they must have probable cause to arrest you for DUI. One way that they establish this is through the use of field sobriety tests. If you fail the tests, the police can rely on their observations to justify an arrest. Our experienced attorneys are familiar with these tests and can challenge the officer's observations at or before trial to help you fight your DUI charge.

There are three standardized field sobriety tests that were developed in the 1970s with the support of the National Highway Traffic Safety Administration (NHTSA) in an effort to help police identify intoxicated drivers. Each test has an instructional phase and a performance phase. The instructional phase consists of the officer telling the suspect the instructions for the test. The performance phase consists of the officer observing the suspect perform the test on which they were just instructed. All of the tests require you to perform two or more tasks simultaneously, which is why they are considered divided attention tests. The three NHTSA approved tests are:

What Is the Horizontal Gaze Nystagmus (HGN) Test?

The HGN is a test where a person is required to follow an object held by the officer with his eyes. The police officer typically uses a pen or similar object and move it from side to side. The suspect is instructed to stand with his hands at his sides and follow the object with his eyes only (i.e., you cannot move your head). The officer is looking for nystagmus, which is involuntary eye jerking movements, that occurs when the eyes look to the side. The theory behind the HGN is that, as people become more intoxicated, the jerking motion in their eyes becomes more extreme. It is also presumed that, as a person becomes more intoxicated, they are less likely to be able to keep their head from moving when following the object, which is an additional indicator of intoxication.

What Is the One Leg Stand (OLS) Test?

The OLS tests a person’s ability to keep his balance while standing on one leg. The person must stand on one leg and lift his other leg approximately six inches off the ground while counting aloud, usually for about 30 seconds, but this can vary. While doing this, the person is supposed to keep his hands at his sides. The officer is looking for the following clues of intoxication:

What Is the Walk and Turn (WAT) Test?

This test involves walking nine steps heel-to-toe, making a three-point turn, and taking another nine steps back heel-to-toe. The suspect is instructed to do this in a straight line. During the instructional phase, the person must put one foot in front of the other in a heel-to-toe stance while keeping his hands at his side.

Once the test begins, the individual must count out his steps and must not stop until he completes the entire test. Signs of intoxication include:

Your Right to Refuse to Take a Field Sobriety Test

You can refuse to take a field sobriety test. Although the officer may make it sound otherwise, there is no law that requires you to agree to the tests. You may strengthen your DUI defense by refusing to perform the test because there would be less evidence against you. Even if you were sober, it may be difficult to pass these tests.

If you already took these tests, it is important to understand that you may have defenses to the results being used against you in your DUI case. There are detailed instructions on how the tests must be administered by the officer conducting the test. In addition, the interpretation of the test results may be incorrect.

Have you been charged with DUI in Fairfax or Northern Virginia? Our experienced DUI attorneys have decades of experience assisting clients facing these charges. Let us help you build a strong defense to your DUI charges so that they are dismissed or reduced to a less serious offense. Call our office today to schedule a free, no-obligation consultation.